Ideal recycled some weapons from some of their other C/A sets into this one. These were identical to the regular versions except they were painted differently.
(Ex. the rifle and one of the guns were the same weapons that Captain America came with.)

Directional Communicator, Available in 1967
Strange looking item that good 'ol Cap used to communicate with Aliens and such I'd guess.
It usually has the antenna's broken off as they are very fragile. It also came with two handheld items, one that looks like a mega-phone.

Jet Mortar, Available in 1967
A cannon type of contraption that would actually fire two shells. Blue/green with silver and red trim. The legs are very easily broken and are found in that condition quite often.

Parachute Pack, Available in 1967
Large parachute that would fit into a orange and blue backpack that C/A could wear.
It is a functional parachute (sometimes).
Note: The set also came with silver boots and an orange helmet.
The parachute was also included in a special promotional C/A figure set

One of the cooler C/A acc. sets. This set came with a blue, silver and yellow jet pack, silver helmet, silver gloves, silver boots and a variation on the regular C/A belt, which is longer than the regular belt and doesn't have the slit for the sword.

Beware of complete sets being sold missing handles for the pack. 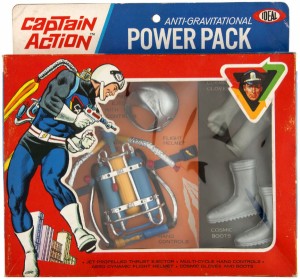 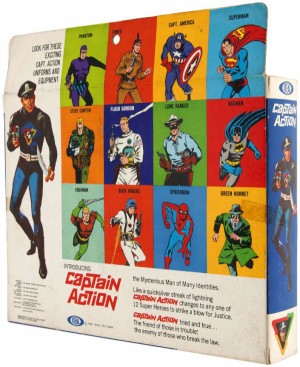 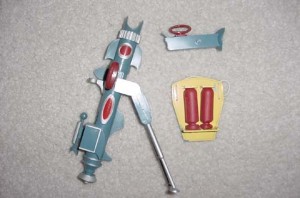